Combating Loneliness: The Rise of Twitch in Lockdown

Zoom. Houseparty. Clubhouse. Another group chat you didn’t ask for. With Covid taking away our conventional methods of socialising, thousands of communities have sprung up across the internet. United by their isolation, families have gathered for Zoom quizzes; friends have hosted Netflix watch parties; strangers have braved (virtual) first dates. These activities have, for many, been the saving grace of the past year, providing connection in a time of isolation.

Thanks to lockdown, loneliness - once so easy to ignore - has morphed into a universal issue. An April 2020 survey by the Office for National Statistics found that 5% of people felt lonely “always” or “often”. By February 2021, this figure had increased to 7.2% (covering around 3.7 million people). The fact that this figure rose following a Tier 4 Christmas speaks to the lasting impact of even a short season of isolation.

Like many across the UK, Ken Cheng couldn’t go home for Christmas. Thinking that there must be millions in the same position, he set up a Twitch stream called Combating Loneliness: a place where those trapped in deserted flat shares and empty student halls could enjoy some brief company. The stream was a success; six months later, it’s still going strong.

According to the ONS, single-person households are almost twice as likely to be affected by loneliness than those living with one or more people. This is where streams like Combating Loneliness come in. Whether he’s playing games like Among Us or discussing the events of the day with fans, Ken has become a regular fixture in his viewers’ routines. Watching his stream the night before we speak, I realise for the first time the value of streaming. Cooking dinner for one on a Tuesday night suddenly becomes an event when you’re hearing the buzzing conversation of the (digital) room.

Twitch was already a huge platform pre-lockdown. From professional streamers to small influencers; from Snoop Dogg to AOC, the platform attracts thousands of streamers and millions of viewers - none more so than during lockdown. According to Talking Influence, Twitch saw a 24% rise in viewership in the first month alone. 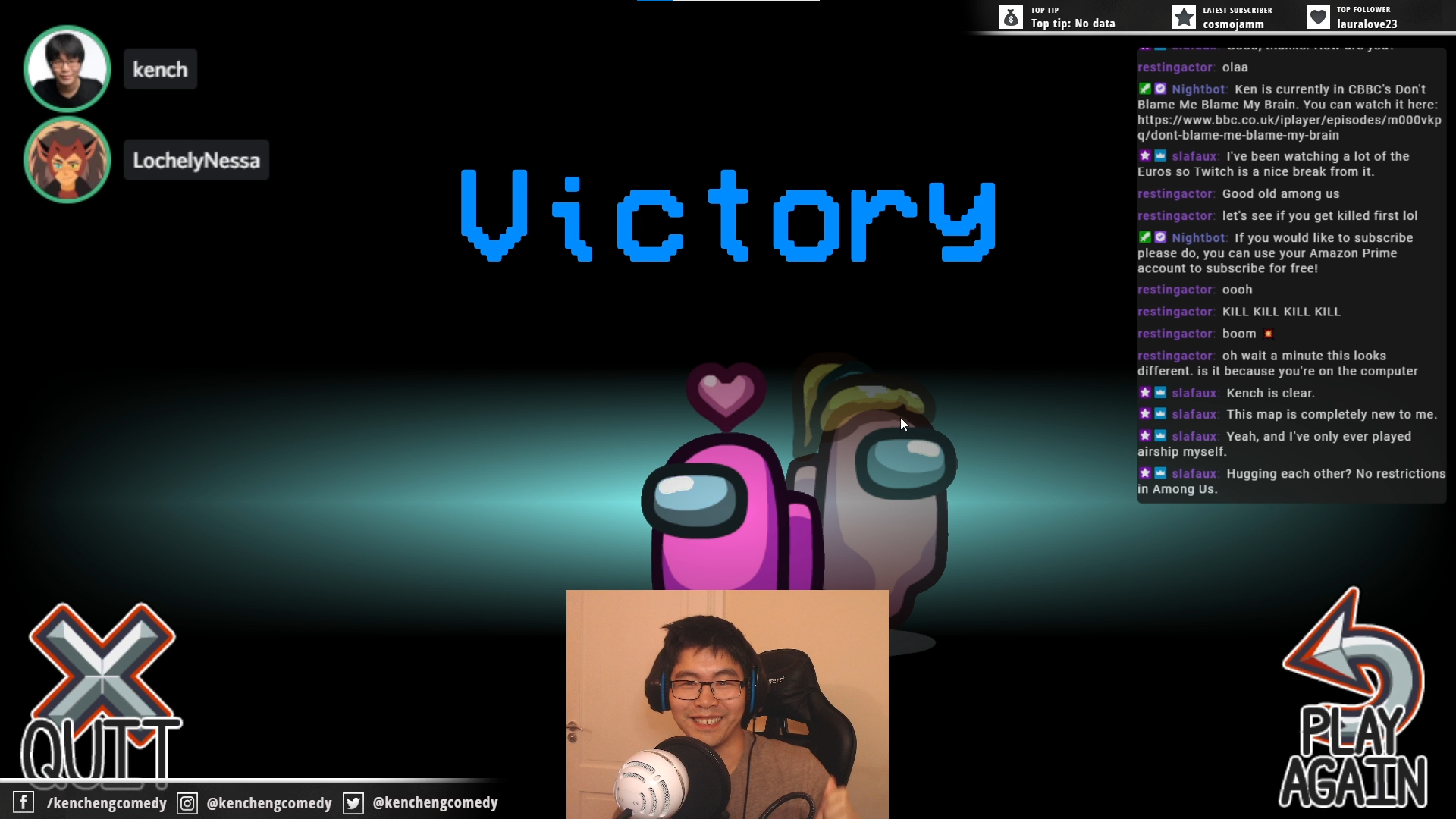 A screenshot of ‘Among Us’ with Ken’s webcam feed below

Is the sudden uptake just another antidote to boredom? Not necessarily. Ken explains: “It’s a form of social media, rather than an entertainment platform. […] The common misconception is that the audience wants to watch people play games: but it’s really about community.” Unlike Facebook or Instagram, where groups have to be sought out and are very rarely found, community is the heart of Twitch. The live chat is a hub of activity, and often branches out into separate Discord servers, where streamers can talk directly to their fans.

The warm, communal nature of Ken’s streams makes it easy to see why people are turning to Twitch over Twitter. Thanks to an active live chat, Ken can interact with and respond to viewers’ comments and questions. Though it seems alien compared to live comedy, Ken recognises the intersection between the two. “I wanted to start [streaming] because it’s a good platform for comedians,” he says. “Lots of comedians host radio shows; the streams feel like live radio.” Unlike stand-up, “you’re not doing jokes, a script, or anything that necessitates feedback.” Although the audience enjoys watching him play games, interaction is their motive for joining - hence why the laidback, conversational streams are his most popular.

The Combating Loneliness stream seems to have a universally positive impact. People often have it on in the background whilst working from home, giving everyone (including Ken) the chance to meet new people everyday. But how does Ken maintain the stream as a positive space - for himself as well as his audience?

“The chat is a lot less stressful [than a live audience],” he explains. “You can decide what sort of atmosphere you want on the show, and you have control over awkward moments.” Although the occasional troll pops up in Ken’s stream, it is quick and easy to ban anyone with ill-intent.

With the rise of social media comes the rise of social media burnout. Over the past few years, high profile YouTubers and streamers have taken breaks from their strict schedules as the pressure of being a public figure is too much to maintain. Ken acknowledges that streaming does have certain pressures, with motivation lacking at times. But he also states he didn’t do it enough to experience this sort of burnout.

“I didn’t set any career or financial goals for the stream. But for those who need a new financial option, it can be quite difficult. It can take people a long time to make money.”

With these external pressures removed, streaming has been an enjoyable experience for Ken. It gave him something to do when Covid put a stop to live performance, and is as much of a social event for him as it is for his audience. Although there is a performative element, the authentic connection between audience and streamer ensures that everyone’s well-being is strengthened and protected.

Ken is currently on a hiatus from streaming, but hopes to continue post-lockdown - providing that he can balance it with his live work. But will the end of lockdown mark the end of Twitch’s popularity?

According to Ken, the opposite is true. Even as restrictions lift and live performance returns, the core audience of Twitch will stay: “It offers something that live performance doesn’t. [They have] two separate fanbases.”

If anything, this seems to be Twitch’s moment. A new, exciting platform that can offer more than its social media competitors, it can (and, says Ken, “will”) only continue to grow.