Aminita Francis is an actor, vocal artist, loop station artist, beatboxer, composer and writer from London who has been working in the arts for 6 years after graduating from drama school.

Her priority is making work about equality and representing minorities. She describes her mission as “speaking out for the underdog through music, drama, soundscape and song”.

Her musical & theatrical works have taken her from Battersea to Brazil. Her talents, originally nurtured by subsidised arts programmes, have come full circle as she now facilitates vocal and performance workshops for young people between tour dates.

I come from a family full of singers so I knew I wanted to be creative but never wanted to sing. My family was so good that I didn’t want to be compared to them so I pursued acting. After going to Coventry University for a bit, I decided the course wasn’t right for me and ended up doing a degree in acting at drama school.

Doing Beatbox Academy at Battersea Arts Centre is what got me into beatboxing, singing and composing. The sessions were about making a sound and if you didn’t want to do that, you could just hang out, vibe and have a good time. There was no pressure to sing and I really liked this relaxed approach. Conrad Murray (the Artistic Director of Beatbox Academy) would encourage me to hum, then gradually to sing a word and then a few words. I found my voice at Beatbox Academy.

You’re one of the collaborators of BAC’s Beatbox Academy. What was that experience like and what were your processes for making the show?

Beatbox Academy is a community. I, and many other of the regular attendees, could never afford to do traditional music training or graded exams so we came here. The weekly sessions were free and ‘drop-in’ which meant that there was no pressure to be there every week or be told off if you couldn’t make it. I see it like a second home, a place to explore musicality.

A few of us were attending the sessions regularly and we became really tight. It was at this point that the producers at Battersea Arts Centre noticed we were getting good. They offered us the opportunity to make a show of our own professionally and be paid for it. It didn’t just feel like an after school club anymore!

Conrad encouraged us to sing, rap, beatbox and compose. Up until then I didn’t know you could compose without sheet music or formal music lessons. We also learnt to write because we had to structure a show that we could repeat and it had to be written down. Even though originally it’s all written on scraps of paper and on notes on our phone… but that eventually became Frankenstein: How To Make A Monster. 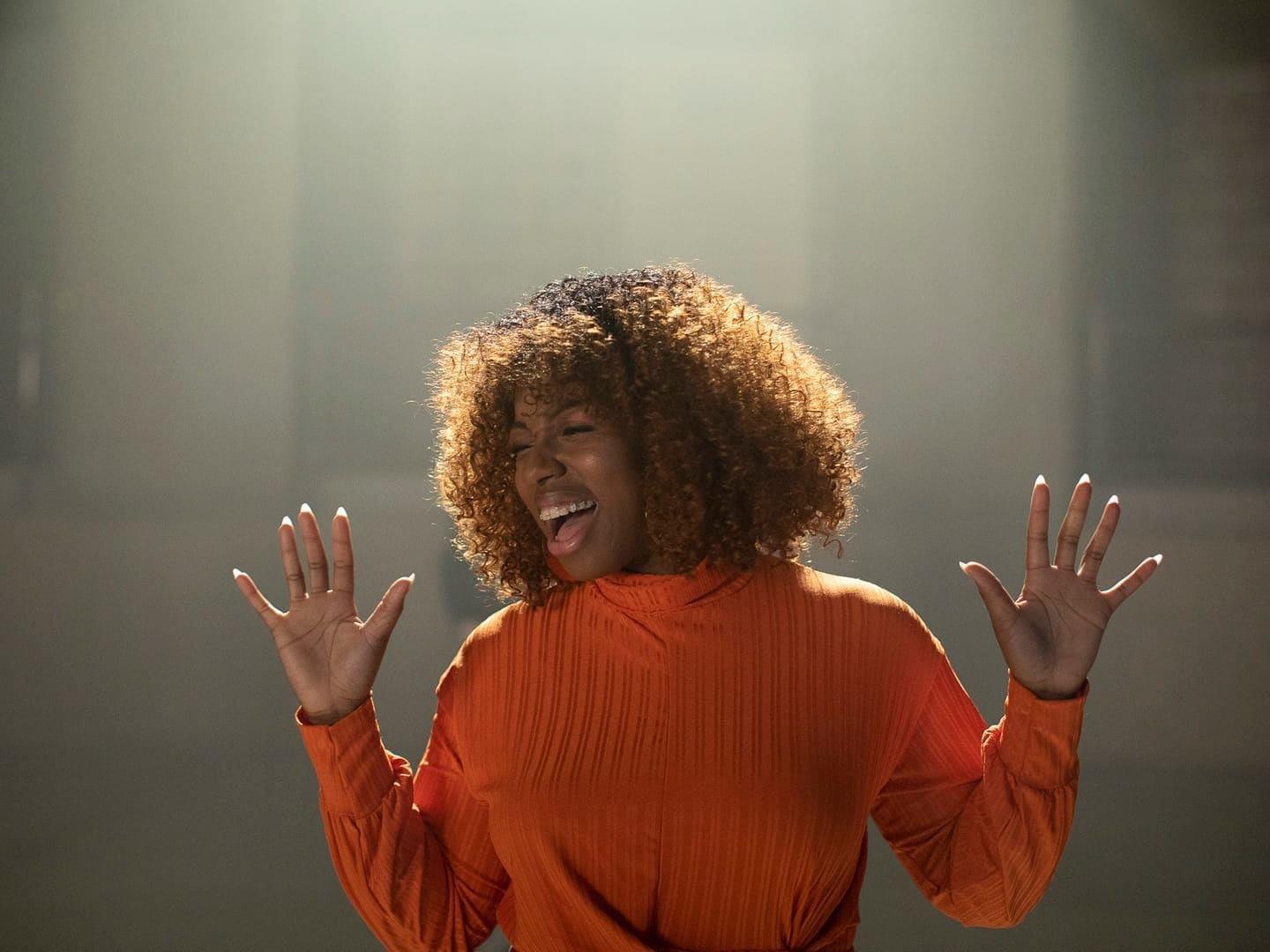 Aminita in BAC Beatbox Academy’s Frankenstein: How To Make a Monster

Why does hip hop/beatbox/spoken word, basically the aural form, resonate so well with an audience?

Because we all have a voice - it’s the oldest instrument and one of the primary means of communication! You can say more with a sigh than with a whole sentence… that’s the power of the human voice.

It’s also so accessible. As soon as you pick up an instrument, you isolate people because they can’t afford them or the lessons required to play them. With the aural form, it’s not divided by class, race, gender or social standing. If you have a mouth, you can beatbox! You don’t even need teeth!

I run beatboxing workshops with non-verbal people and it really helps them to express themselves. When you strip back the barriers that conventional music instruments present, there is a lot of creative freedom.

What was it like receiving fame in Edinburgh and on an international scale for Frankenstein: How to Make A Monster, the Beatbox Academy’s award-winning show? And did it have an impact on your wellbeing?

Unexpected. Previously I have had a lot of nay-sayers by nature of being a plus-sized, working class, black woman. There are so many reasons why people think that I shouldn’t ‘make it’. Certain people told me not to do the ‘weird beatboxing thing’ because it would pigeonhole me but instead encouraged me to audition for Dreamgirls. This drove me further into the community of the Beatbox Academy.

I’d also never been to the Fringe before because I couldn’t afford it so the whole experience was such a shock!

It was wonderful to have acclaim from different people. Our audience was not just young, old, rich, poor, black, white, urban or music-oriented - it was broad! The story of Frankenstein itself is about how we deliberately create societal divides when really we’re all the same, so everyone resonated with it.

I never thought an international tour or a BBC film version would come off the back of it but it shows what is possible when you stick to your truth and don’t let other people tell you what you can and can’t do.

You’ve worked in quite a lot of traditional theatre space (eg The Old Vic, RSC, Turbine) - how have you found navigating these spaces as a woman of colour?

But I am blessed that I am the type of person to speak up because this is what it takes for change to come.

I’ve also had many wonderful times in the industry, specifically with the Beatbox Academy and another company called Hot Brown Honey. We have a long way to go but I hope we keep moving in the right direction.

Your new show I-Loop is previewing at Sightlines Festival! What inspired the creation of this piece and its form?

I-Loop came about as a result of lockdown when I wasn’t able to access my normal creative outlets and keep busy with work. Usually when I create things, I come home and I’m too exhausted to address any of my inner issues but in lockdown, I had the energy to look at myself and I struggled with what I was confronted with. I needed to let these ideas out and expel them from my body so the show’s content is an expression of these feelings through music and poetry.

The form is also inspired by lockdown in a way. I was living the same day on repeat and the loop station tool mirrors that. I wanted the form to reflect the content too.

I thought that if other people were feeling the same way then it might be useful to share my experience so I put it together and was selected for Camden People’s Theatre’s Starting Blocks development scheme. Hopefully someone might think it is good art, whatever that even means.

It sounds like the show is quite raw in parts, how do you cope with performing potentially difficult material?

I don’t know. I have never shared anything this personal so I guess I’ll find out on Saturday! But I hope it’s freeing more than anything. Often people don’t don’t talk about traumatic things because we are ashamed, scared of being deemed ‘inappropriate’ or a ‘debbie downer’ so hopefully putting this show out there will be a relief and will help more people than just me.

Even though it’s personal, people will still have opinions. There is fear of them criticising my life. But it will be nice to share it and see what the community thinks of my work to hopefully inform the direction of the show.

Sightlines is a festival about wellbeing, what are your top tips for maintaining wellbeing and looking after your mental health?

Talk to people you trust. In lockdown, I really isolated myself: I was so in need of social interaction that when zooms and phone calls ended, I would be thrown into a deep and dark place so I decided not to make contact with anyone in the first place so I wouldn’t feel the darkness. It wasn’t healthy. Find your tribe and talk to them.

Is there anything else you want to mention, promote or shout out?

Shout out to CPT for helping me to stay on track with the creation of I-Loop. And to Sightlines for giving me a platform to share my work.

Finally, big up Battersea Arts Centre, Beatbox Academy and Conrad Murry! And to Soundworlds who are going to be collaborating on the future development of I-Loop.

Catch the Work in Progress showing of I-Loop tonight (24th July) at 7pm, followed by a Q&A and chance for the audience to give feedback.