Why a performance and wellbeing festival?

Mental health is so often treated as merely a side-note or a buzzword. Speaking to artists and arts journalists, I have frequently heard them complain that the conversation around wellbeing is often limited to a single question in an interview, a single paragraph in an article. Wellbeing is pivotal to everything in our lives, it is not niche or new and it needs to be afforded such significance.

The idea of a festival focusing specifically on the relationship between performance and wellbeing is something I have had in the back of my mind for a long time. I’ve seen first hand the need for a clearly defined space to facilitate conversations around mental health and the stage, which underlies the experience and work of many artists and audiences.

In 2017, whilst studying in Edinburgh, I started Big Mind Theatre. Originally, the company was established to create Mind-Full, a piece of verbatim theatre about student mental health. In the first couple of years of my degree, I was struggling with mental illness for the first time and had recently been diagnosed with Obsessive Compulsive Disorder. With so many of my friends and classmates at university also facing challenges with their mental health, I wanted to help facilitate a conversation around mental illness and wellbeing. Creating a performance was the best way I knew how.

I don’t think Mind-Full was the strongest piece of theatre I have directed - I’m sure I would do it differently now - but I am so appreciative of the learning process that writing and rehearsing it involved. It inspired me to keep exploring how to create shows that keep wellbeing in mind, not only in their subject, but also in how they are produced and rehearsed. Sammy Glover, a wonderful director and facilitator offering a workshop as part of Sightlines, talked to me about the generational divide in rehearsal rooms. They have found that younger artists are emphasising wellbeing in a way their older counterparts have never considered. These conversations are becoming more prevalent in performance settings across the UK and the innovations of emerging artists is pivotal to the shift. This is exactly what we aim to create more space for through the festival.

Whilst programming for Bedlam Theatre as well as working a multitude of other roles at the Edinburgh Fringe, I felt very lucky to meet lots of different performers, all with their own unique practices. But I also saw, time and again, how the Fringe was taking a toll on their wellbeing: From people struggling with mental health problems or external personal challenges trying to balance them with a month of non-stop work, expectations to see multiple shows a day and going out every night. To comedians who felt that they had to be there every year to have a chance of forwarding their careers despite losing money each time. To talented artists facing the impossibility of standing out amongst thousands of other shows, dealing with the emotional rollercoaster of fluctuating audience numbers and response with little outside support. To young theatre-makers who would pay large amounts to perform and work full-time venue roles for less than minimum wage.

In 2018 I created a survey to ask the thoughts and advice of fringe-goers, staff and performers. I put together the findings to make the Anxiety-Free Fringe Guide. Published through Big Mind and with the support of Fringe Central, the guide was well received, but it felt like a drop in the ocean. Addressing the culture that has developed over the lifespan of the Edinburgh Fringe - which acts as a microcosm to the wider issues in the industry - is a much bigger job.

Both in terms of the Fringe and performance as a whole, we desperately need to talk more about the inequality of access, lack of diversity, oversaturation, commercialisation, undervaluing of community arts spaces and dismissal of the needs and voices of artists. What sits alongside all of these issues is the fact that wellbeing is not as important as marketability. Profit will always be prioritised. This fosters the dangerous idea that if artists won’t make the necessary sacrifices, it is because they can’t handle it, and they are not cut out for the job. So, how can we create spaces and institutions that are beneficial instead of detrimental to the wellbeing of everyone involved? That value work which promotes personal and societal wellbeing whilst also taking care of the artists who make it?

Questions around wellbeing have generally become more prominent since the start of the pandemic. Mental health is finally being addressed on a large scale in the mainstream media. For performers, the lockdown forced most to - at least for a little while - stop creating. With this forced pause, many artists were able to notice more clearly the ways in which art and performance tended to contribute to their wellbeing, both positively and negatively. For some, this led them to leave the industry for something safer and more supportive. For others, such as comedian Bilal Zafar, lockdown led to innovation. Over the pandemic, Zafar developed an audience and income through streaming on Twitch, blending gaming and comedy for an audience eager for live engagement and humour. The development of the online performance space has shown the potential to allow a different kind of creativity and agency for artists, as well as allowing them to keep putting their work out into the world when they can’t perform in person. 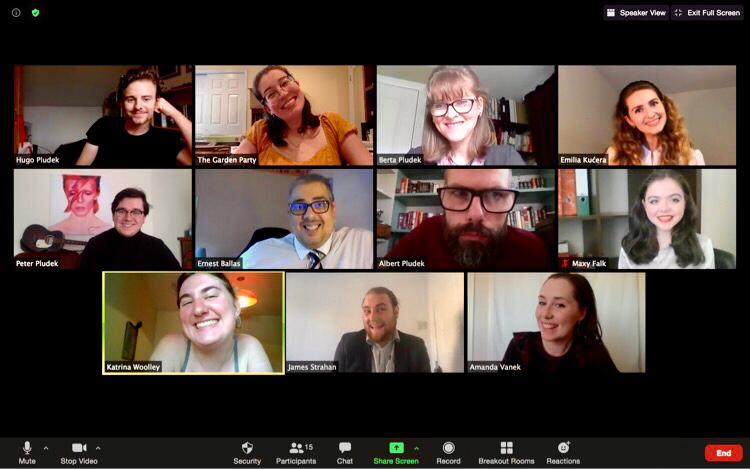 Above: Katrina with the cast of Big Mind’s The Garden Party performed over Zoom in July 2020

Last summer with Big Mind, I directed Havel’s The Garden Party entirely over Zoom: auditions, rehearsals, live performances and even the after-party. We wanted to see if we could reconnect with performing during the lockdown. The experiment was a success in that the actors, most of whom had never met in person and were spread out across the UK, said they were shocked at how close the rehearsal room dynamic and the feel of the shows were to performing live on stage. Since then, I have tried to see online performances not as the inferior cousin of in-person performance, but as a unique opportunity. That’s what we hope to harness here. The online format of Sightlines allows us to offer this festival in a way that is accessible and UK wide, not to mention being safe and unaffected by the unpredictable nature of the current restrictions.

My own wellbeing has needed a new kind of attention in the last nine months or so. I have developed a hard-to-diagnose chronic illness which might be long-covid, an immune problem, or something entirely different. The bottom line is that my physical health has become very fragile - I am easily fatigued and unwell if I push myself too hard, eat or drink the wrong thing, or get too stressed. Creating a new festival from scratch whilst balancing my health and the rest of my life has been a challenge. But it has also required me to work even harder to put boundaries in place, communicate honestly with the rest of the team, and remember to put my wellbeing first. This is something we want for every person involved in Sightlines. Marketability is no longer the priority.

When speaking to Helen Monks from LUNG Theatre - whose verbatim work is particularly admirable for being developed and performed with a consistent awareness of its impact at every stage - she talked about the line between ethics and wellbeing and the responsibility to everyone involved. Looking after our own, each other’s and our audience’s mental health requires making this a priority, and goes against the norms of how organisations typically function. In another of the many inspiring conversations I’ve been lucky enough to have in the run up to the festival, Lucy Hopkins, a brilliant clown who will be performing with us, said “We aren’t getting back to a healthy place. That place doesn’t exist yet. It has to be created from scratch”.

When choosing what events should be part of the festival, I didn’t want to have control over which questions and ideas were most significant. Instead, I asked artists to talk about what the most important issues around performance and wellbeing were to them, how this last year has been, how their relationship with the industry has changed. Conversation is at the centre of what Sightlines is aiming to achieve. We want to bring artists with overlapping experience or interests, who have not met and never usually get an opportunity to reflect on their practices, into a virtual space to connect. We have made an effort to get each artist involved in multiple ways to create a sense of community, despite not being in a physical space together. This also helps to emphasise the significance of the artists’ voices. They are not just talented, entertaining performers and facilitators. On top of all that, their experiences in this industry have given them unique understandings of the challenges, wonders, and benefits of performance.

Speaking to artists is the best bit of my job. I love hearing what they’re working on, what they’re thinking about, and how they’re exploring performance and wellbeing. This conversation is infinitely large, so we will only be able to scratch the surface, but I hope you feel that the variety reflects the fact that this is an artist-led space. These two weeks can hopefully be a start of many new conversations and an opportunity to learn from one another. We don’t often get time to take a step back and examine how we work, or how we can do it in better, safer, kinder ways. Whether you are an emerging artist, an experienced creator or an avid audience member, I hope you enjoy the festival, and that it allows you to reflect on what performance can do and has done for you.