“I’ll tell them what it’s like to be a frigid bitch.”

This was Helen Duff’s inner monologue as she donned a Mac in a Sac and two pairs of tights and told a room full of people at the Edinburgh Fringe about her inability to orgasm.

The story of a woman’s inability to experience sexual pleasure has been told by many a man. But this time the story was being told, in depth, by a woman, who peeled back the layers of the issue to reveal its psychological basis - all while dressed as a giant sperm.

Helen’s honesty onstage inspired post-show honesty in her audience. Four years after packing her sperm costume away, Helen wants to continue to “widen the conversation around what pleasure looks like”. Hence, Come As You Are was born: a podcast where women and non-binary people discuss their personal experiences with orgasms. The first series focused on performers and comedians; the second, she tells me, will include more professionals - including a sex historian and a birth doula.

But the podcast isn’t merely factual: it is a piece of creative work in its own right. “I love podcasts that are really lush to listen to,” she says - a fact that is evident in CAYA’s carefully crafted production. Helen records and edits each episode with the integral help of two producers. Having a team of voices makes each episode strong; it also ensures that Helen isn’t “over the top or too vulnerable in a way that isn’t necessary”. 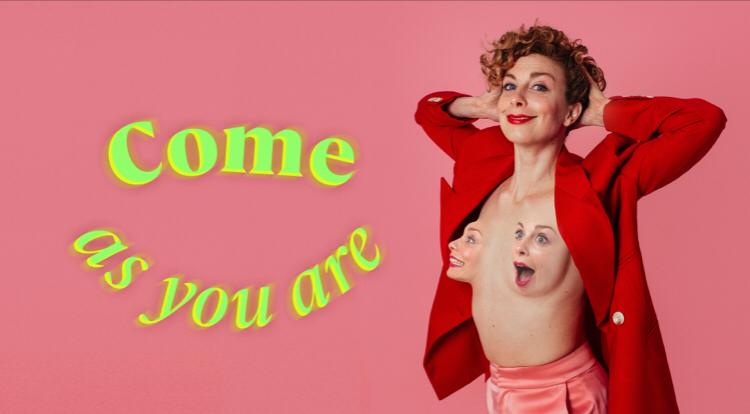 Helen Duff in publicity for the Come As You Are Podcast

Whilst autobiographical shows seem to be coming into their own in the theatre world, they are already a mainstay in stand-up. Comedy is widely acknowledged as an effective way of coping, and personal narratives are welcomed by an increasingly large audience.

But there can be downsides. Speaking to the Guardian in May 2020, Hannah Gadbsy reflected on her decision to feature her trauma in Nanette: “You have to be in control of the trauma […] before it becomes public property, I believe. And I’m glad I did, because the level of attention I got with Nanette was truly frightening. It felt unsafe.” When material isn’t filtered in this way, it can be hard to perform. In a 2012 Imagine documentary, Simon Amstell stated that a breakup became a joke three days after it happened. “It’s almost upsetting how quickly [life events] can become material.”

Creating autobiographical work is, inherently, a risk to wellbeing, especially when it comes to deeply personal subjects like sex and sexuality. But, as CAYA shows, we must not downplay its benefits. In a particularly striking episode, comedian, podcaster and drag king Jodie Mitchell explains how performing with Pecs Drag Kings helped them overcome internalised homophobia and butchphobia. Being in a show that is “very sexualised” would once have been impossible; once they were onstage, a realisation occurred:

“Sex is this beautiful thing that can be appreciated by everyone. […] It was this epiphany moment where I was like, ‘I’m not toxic and there’s nothing wrong with me. My sexuality is a natural part of myself that’s good and neutral rather than actively bad.’” Freed from the feeling that their sexuality is toxic, “everything [has] clicked into place”.

For Helen, distance is key when using real-life experiences in creative work. The “processing time” between her Edinburgh show and the podcast was an important part of her personal journey. When it comes to performance, “You don’t owe total honesty to an audience, because they don’t expect that of you.” She recalls seeing performances where “the person [onstage] isn’t safe”; where openness is equated with “telling your worst story ever”. The fact that the first series of CAYA focuses on performers puts this issue centre stage.

Protecting your wellbeing as a performer whilst discussing personal or traumatic experiences is a big theme within the conversation at Sightlines. Emily Aboud talks about it here, and there are various workshops focusing on the subject, including Dave Chawner’s Comedy for Coping workshop (tailored specifically for those with mental health difficulties) and Sammy Glover’s workshop on Creating Held Spaces in Rehearsal Rooms.

When it comes to creating work around sex and sexuality specifically, Come As You Are makes it clear that this is both an opportunity and a challenge. It is clear that the performer must be the priority: the work created is only beneficial when it’s creator is in full control of its content. As for sexual wellbeing, Helen is excited about the direction the conversation is headed: “Women and non-binary people have become much more present … They’ve taken up space in a way that I’m really excited about.”

Towards the end of season one, comedian, performer and facilitator Annie Bashford joined Helen to discuss her experience of bipolar disorder and how it affected her sense of self. The openness with which she talked about her experience was striking to me - none more so than when she described her love of performing:

Performance can be truthful without being completely vulnerable. In order to truly widen the conversation about sexual wellbeing in performance, we need to allow for all kinds of experiences to be shared, all kinds of people to share, and every kind of reality to be seen - real, alternate or otherwise.